Khon Kaen University (KKU) was established as the major university in the northeastern part of Thailand in 1964 and has since devoted itself to becoming one of the top universities in Thailand. The university’s major mission is to prepare future global citizens to work in a continually changing world. KKU’s strategic goal is to be recognized both internationally and regionally as a leading university in research. KKU currently has more than 40,000 students studying in 19 faculties, 3 colleges 1 school, and 2 campuses.

Khon Kaen University has continually developed as of the date of foundation until today. The success of development and administration can be divided into 3 periods as follows:

First Period: Foundation and expansion of the university

This period lasted for nearly two decades from 1964 until 1983, marking continuous founding and expanding of the university

Khon Kaen University (KKU) is the first university founded in the Northeast according to the policy to expand higher education to the regions under the First Social and Economic Development Plan. The goal is to develop manpower and bodies of knowledge for solving problems in the Northeast, a large region where one third of the nation’s population reside. People in this region, most of whom are poor, always face the problem of drought every year, and thus agricultural production is not good. King Rama IX and Her Majesty the Queen came to officially found Khon Kaen University on the 20th of December, B.E. 2510. On this occasion, His Majesty King Rama IX kindly gave a speech, one part of which is as follows: 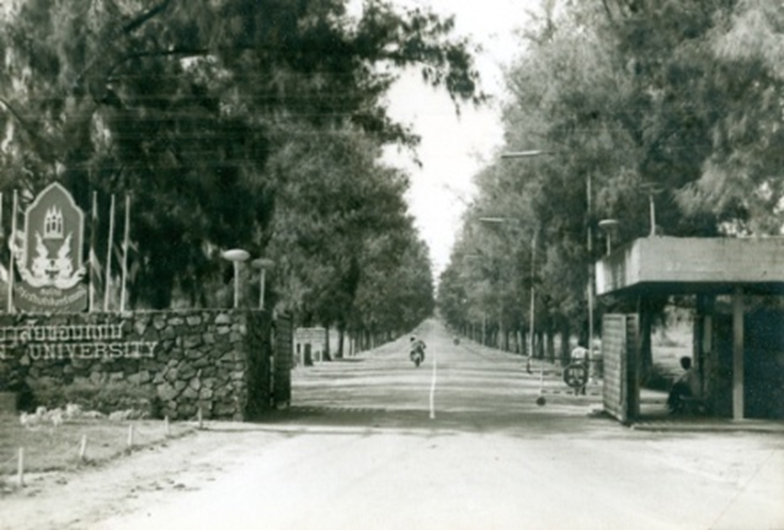 There were 3 faculties during the first period of foundation: Faculty of Agriculture, Faculty of Engineering, and Faculty of Science and Arts (at first with no students and assigned to provide instruction of foundation courses only). In the first year of establishment there were 107 students. The first group of graduates in 1967 was 59. The following faculties were respectively founded: Faculty of Education (1969), Faculty of Nursing (1971), Faculty of Medicine (1972). Thus, there were 6 faculties during this period. In addition, Khon Kaen University Demonstration School was also founded to be the base for teaching and learning and to provide academic service to outside communities.

Expansion of the university was in the field of health science, with the following faculties established: Faculty of Associated Medical Science (1978), Faculty of Public Health (1978), Faculty of Dentistry (1979), Faculty of Pharmaceutical Science (1980), followed by Faculty of Humanities and Social Sciences (1978) and the Graduate School (1978). Besides, supporting departments were founded including Office of Academic Services, Research and Development Institute. Most importantly, Srinagarind Hospital was built as the base for preparing graduates in medicine and to provide health service to people in the Northeast. During this period, there were 12 faculties.

Second Period: Development and building of bodies of knowledge

During the beginning of this period, more faculties and organizations were founded: Faculty of Technology (1984), Faculty of Veterinary Medicine (1986), Faculty of Architecture (1988), Faculty of Management Science (1992), Computer Center (now changed to Office of Information Technology), Center for Continuing Education (Now Office of Academic Services) and Queen Sirikit Heart Center. The university was assigned by the government to assist in founding Ubon Ratchathani University and Suranaree University, which became independent as Ubon Ratchathani University and Suranaree University of Technology. During the third decade, there were 16 faculties in Khon Kaen University.

During this period, besides continually preparing graduates in different fields for the society who worked in different regions of the country; Khon Kaen University also conducted research to build bodies of knowledge that were beneficial to solutions of problems in the Northeast, for instance, development of small-scale water resource in rural areas to solve the shortage of water for agriculture, development of system agriculture with overseas organizations, research for development and solution of important health problems and diseases in the Northeast. At the same time, there was increasing work in socio-cultural research in the region.

More faculties were founded during this period, making the university becoming the key Comprehensive University of the country. The faculties and organizations founded included: Faculty of Fine and Applied Arts (1994), Nongkhai Campus (1997), College of Graduate Study in Management (1997), Office of Registration and Assessment (Now Office of Academic Development and Administration), Me Kong Institute (the status changed to an international organization at present), Peace Studies Institute (an autonomous institute under Khon Kaen University. There were 18 faculties and one campus in this period.

During this period, there was a changing trend resulting from globalization, where technology leaped forward. The socio-economic changes brought a lot of impact all over the world. This included the free trade policy of Thailand. At the same time, the official reform also took place with an aim towards achievements through strategic management and quality administration was applied in official systems.

Khon Kaen University’s administrative system changed to strategic management, with modification of organizational structures and systems. Khon Kaen University’s vision was stipulated towards becoming a research university to construct new bodies of knowledge for community, society and national development. The university has since then acquired strength in research with new 15 specialized research centers established, a lot of research work published in both national and international journals. The results of research studies have been used in the solution of major problems in the region. The university has announced the goal as an organization with “Social Devotion”. This communicates the notion to the people within the university and outside to realize the direction of operations. Meanwhile, Khon Kaen University has entered the age of intensive quality assurance performed by different official and independent organizations such as Office of the Public Sector Development Commission (OPDC), Office of Education Standards and Quality Assessment (ONESQA), Office of Higher Education Commission (OHEC). The university also entered the international assessment performed by Asia week (Asia’s Best Universities 2000) and Times (World University Ranking 2006).

In 2009, Khon Kaen University was chosen by the government as one of the 9 “National Research universities’. The target is to bring research outcomes to solve problems in the Northeast and to drive towards an international level. At the same time, the Academic Service Division was integrated with Office of Registration and Assessment to become Office of Academic Development and Administration. More faculties were founded, namely, Faculty of Law (2006), College of Local Administration (2007), and International College (2008). The structure of Nongkhai Campus changed and now includes 4 faculties, namely, Faculty of Business Administration, Faculty of Integrated Social Science, Faculty of Arts, and Faculty of Applied Sciences and Engineering. More supporting organizations were founded such as Office of Teaching Innovation, Office of General Education, Language Institute, Confucius Institute, Office of Research Administration, Office of Quality Assurance and Assessment, Office for Coordination and Management of Complaints, Office of Law, Office of Intellectual Properties, and autonomous organizations including Center for Coordination of Northeast Software Industry, Center for Business Incubation, Northeast Science Park, Northeast Strategy Institute, Khwan Mo Hotel. During this period, there were 25 faculties.

This is the period of growth, with enlarged size of organizations. Faculty of Economics was established in 2005, splitting from Faculty of Management Science, whose name changed to Faculty of Business Management and Accountancy. During this year, Khon Kaen University changed its status to an autonomous university on July 18, 2005 so that administration would become more efficient and so as to respond to external changes such as the decrease of population, which results in low rate of enrolment by high competition among universities in admission of students since there are a lot of universities, both governmental and private. More international institutions have been founded in the country resulting from ASEAN. The change of university admission to TCAS also reduces the enrolment number and so the university has to change and improve the curricula with more cross-disciplinary programs that meet new generation demand.

According to the goal of “Social Devotion”, Khon Kaen University applied and utilized research outcomes in the region through many projects such as the Northeast Sufficient Economy Prototype Community which are distributed all over the Northeast including, Kae La Wa Project, KKU District Development Project, Public Health and Education Problem Solution Project to lessen the social gaps. The latter is a big project integrating many sciences together, and receives continuous budget from the government. This project consists of smaller projects, namely, Northeast Cholangiocarcinoma and Liver Fluke Disease Project, Northeast Project for Development of Advanced Thinking in Mathematics, Poverty Mitigation Project by Sufficiency Economy, Northeast Prevention of Chronic Renal Disease Project, KKU Smart Learning Project. The implementation of these projects all leads to improved quality of life of the people.

Faculty of Medicine has expanded health care service of Srinagarind Hospital, under the intention to serve the community by upgrading the hospital to an excellent medical center with coverage of major diseases of the Northeast. This center received budget allocation from the government totaling 4,300 million baht in 2019.

In addition to all of the above, Khon Kaen University has become a Lifelong Learning Center from adjusting some campus areas as the social learning park such as the area by Sithan Lake, KKU sports center which now becomes the Sport Park. People from outside are able to use the areas.  The Natural Museum, Science Museum have been built as well as Nongkhai Aquarium. At the same time, there is conservation of original forest areas and birds for bird studies. Some areas have been modified into Agro Park and Culture Park. At present, many people from outside use and participate in the activities at these parks.

For quality management, Khon Kaen University is assessed by external organizations at the institutional level, faculty level, and program level based on the evaluation standard used in the country and abroad: QS Ranking, Times Higher Education, etc. In 2018, Khon Kaen University was assessed by THE (Times Higher Education) as the first of Thailand or the 15th – 40th of Asia and the 101st – 200th of the world in Social Impact.

Within the country, Khon Kaen University is assessed by many systems such as the internal quality assurance by Office of Higher Education Commission (OHEC), by the Education Criteria for Performance Excellence (EdPEx) and TQA. In 2018, Khon Kaen University was assessed by the National Product Increase Institute of Ministry of Industry and received Thailand Quality Class (TQC). KKU is the first university of Thailand to receive this award.